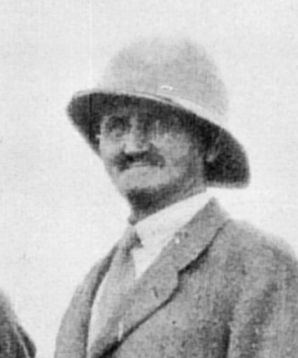 Safari Trail - a big, powerful man, reckless as the devil and generous to lunacy, unless you tried to interfere with his poaching. No bear-leading safaris for him; he poached and sold the ivory and woe betide him who stood in his way. Mention of his name to Portuguese and German game officials made them gnash their teeth with rage. Once, when Germany occupied what is now Tanganyika, he had seized an islet in the middle of the river Ruvuma, which bounded Portuguese and German territory; had run up the Union Jack and poached indiscriminately from Hun and Portuguese alike. He was tough and independent as a buffalo: and he would have preferred the company of a tramp out of a work-house to that of a game warden. He died in 1946, well over 80 and still trailing the end of his coat. Mickey's opinion of game wardens and officialdom in general was shared by another wild Irishman, Marcus Daly.
Rundgren - hunted elephant in French Equatorial Africa where licences allowed him to kill any number of elephant
North - Prospector; formerly in Northern Rhodesia & Congo Free State with G.M. Rabinek; at Entebbe with Green 12/1/1903; appt. Forest Ranger EAP 7/6/1903; at Mombasa returning to Bulawayo 25/3/1904
EAHB 1904 - Maurice John Norton - Forest Ranger
Chandler - Mickey Norton was a huge red-headed Irishman, standing six feet four inches tall and weighing in at well over 200 pounds. He immigrated to the United States around 1886, and after working a number of menial jobs for 7 years shipped off to South Africa in 1893. …………. [time in Cape Town, Transvaal, Portuguese E. Africa, British Central Africa, German East Africa]
Norton served in the British army during the First World War, operating as an intelligence officer in the East Africa campaign. Elephant hunter Jim Sutherland was in the same section, and by some reports was Norton's immediate superior. When the war ended, Norton settled in Tanganyika and worked for the game department. ……….. He also operated as a trader and did occasional for-profit elephant hunting, but most of his shooting in the 1920s and 1930s was for the purpose of elephant control. He retired from the department in 1940. Norton was quite prolific: Burger credited him with killing over 4000 elephants, although that seems a bit high. Norton himself reportedly put the total at about 2000 bulls. He was one of the last of the nineteenth-century ivory buccaneers.
His safaris were huge, often with 100s of porters, and he would move from village to village in the remote bush, trading and making alliances with local kings. The natives were generally all too happy to assist him, both to get rid of the crop-raiding elephants and for the meat he provided. A highly regarded woodsman with the reputation of never hunting female elephants, Norton had apparently completed a memoir of his 60 years of hunting and was arguing over the publishing contract when he died in 1949. The manuscript disappeared. John Burger, incidentally, lists Norton's death as taking place in 1946. I have gone with the date supplied by Tony Sanchez (2005).