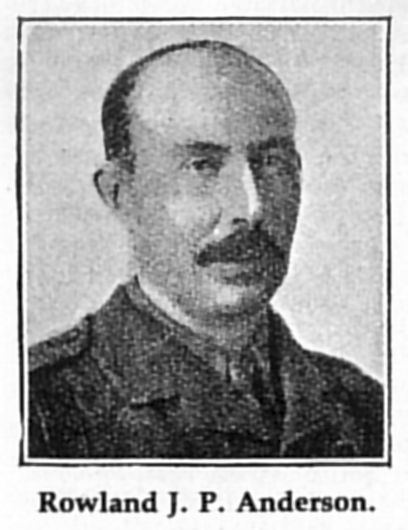 North - 'Ashburnham, Moorehouse and R.J.P. Anderson, they have none of them impressed me with their worth as officers' (Sir Harry Johnston, FO2)
RCS - Collard collection of photographs has photo of 'Anderson, Rowland James Percy (1873-1950) - Lt. 11th Hussars …… nephew of Sir Percy Anderson who had been head of the African Dept. of the FO
DSO - He has served in the European War; went out with the expeditionary force; was present at Mons, the Marne and the Aisne; wounded at Messines 31 Oct 1914; was present at the 1st and 2nd battles of Ypres; commanded the 11th Hussars from May 1915; was promoted Lieut.-Col. 29 Sept 1916. He was mentioned in despatches twice, and created a CMG Jan 1918. His favourite sports are hunting, polo and racing. He married at Aldershot 11 Aug 1914, Phyllis, only daughter of T. Stanley Chappell, of Chadshunt, Warwick
North has Ronald James Percy