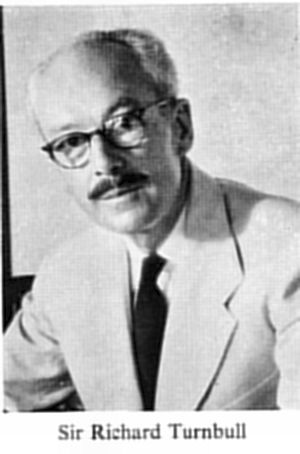 Midday Sun - 'he belonged to the post WW1 vintage, having reached Kenya in 1935, but in the NFD he continued the Glenday tradition of toughness, austerity and hard trekking, into the period after WW2. ........ He made himself an expert on Somali customs and clans, and took pride in his mastery of their complex genealogies. Also he collected, identified and registered in 3 languages - Boran, Somali and Turkana - pretty well every tree and shrub that grew in the region. Like Glenday he was a scientist by training, Turnbull in physics, Glenday in geology and forestry. After 5 years as officer in charge he left the NFD to enter the political world of Nairobi as Chief Secretary, where experience gained by dealing with Somali feuds and intrigues no doubt stood him in good stead in the snake-pit of Legco. he said 'Don't delude yourself, that the settlers were either silly old Colonel Blimps or rough farmers; there were brilliant educated men amongst them who knew far more about parliamentary procedures and the niceties of government than many of us did. They were at us night and day, and it was an excellent thing.' .......….'
A brilliant speaker with a pungent wit' is how one of the unofficial members of Legco, Sir Charles Markham, has described him. 'His opponents in debate were decisively massacred, yet he was never rude. He gave the impression of a benevolent headmaster having to control firmly and kindly a rather undisciplined bunch of school kids, but had none of the aloofness and pomposity sometimes assumed by big frogs in small colonial ponds.'      Dick Turnbull did not altogether renounce the austerities of the North, but these became a little softened by Nairobi's sybaritic influence. He became, and has remained, a connoisseur of wine. Charles Markham has related an episode that occurred when Turnbull, as acting Governor during the absence of Sir Evelyn Baring, was presiding over a dinner party at Government House. 'After the ladies had left the room, Turnbull suggested that we might as well broach another bottle of Chateau Margaux 1947. Having already consumed more than a generous quantity, I suggested that perhaps this was a little excessive, which produced the immediate response: "My dear fellow, if we don't drink it, think of the ghastly chaps who might!" No further argument was needed to convince me that we were doing Sir Evelyn Baring a service.'
In his defence Dick Turnbull has pointed out that Sir Evelyn was not really being robbed, for his digestion had been so wrecked by dysentery that he could eat and drink little but rice pudding and soda water. ............ In 1955 he went to govern Tanganyika. He retired first to Henley where he coached rowing. He moved to Northumbria in later years.
A practical man, down-to-earth, a realist scornful of woolly thinking, rose-tinted outlooks and sentimental judgements - I liked a remark of his concerning 'jam-puff courses such as sociology' - and hardly a romantic one would say. Yet when I asked him what it was about that other, harsher, crueller border that had so captured his allegiance he replied, pausing only to uncork a bottle of ambrosial German wine, 'The romance'.
Dusty - 'can get away with anything'. If he approves of you, you'll swear by him. If not you'd be better dead. But in that case you won't stay here long - you'll just be sent back to some ghastly place like Nyanza.
Cass - a man described as the finest of all PCs in the country remarked: "There was no shortage of alcohol. We had as much as we liked. I used to get mine shipped from London and wine arrived by the crate-load from Nairobi. Charles Markham had an ear to the ground. You could always count on him to put one on to the good stuff."
Rhino Link 18 - Lengthy Obituary by Brigadier Michael Biggs
Buffalo Barua No. 2 - Article page 17