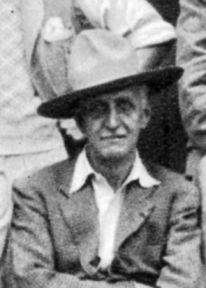 Profession: Affectionately known as Andy, he owned a coffee plantation and had an outstanding career as a big-game hunter.

Cuckoo - Major Anderson and his wife motored to England from Nairobi across the Sahara in 1934. He said that the most dangerous portion of the journey was in crossing London to his home in Sunningdale.
Rundgren - hunted elephant in French Equatorial Africa where licences allowed him to kill any number of elephant
Breath - 1910 - shooting elephants in Uganda
Elephant - Major G.H. Anderson was in the Army when he met Sutherland and became so enamoured of life in the wilds that he resigned the Service and settled in Africa. He accompanied the Prince of Wales during part of his two safaris in East Africa and was white hunter to the Duke and Duchess of York. Despite a severe leg wound, he remains a wonderfully keen shikari, who thinks nothing of trailing an elephant for 25 miles in a day. Probably no one knows the elephant haunts of Kenya so well as he.
Nicholls - 1924 Duke & Duchess of York's safari - Andy Anderson, who was lame, went out to see whether the bait was taken. A lioness on the carcass turned and charged. Anderson shot her, but not fatally, and she slunk into the bush. Anderson went off to get two dogs to track the wounded animal, but unfortunately while searching for her they put up two buffalo which charged. The Duke shot at the leading buffalo at 25 yards, badly wounding it, and then shot and killed the second buffalo.
Soldier Settlement Scheme after WW1 - Class B - Capt. G.H. Anderson, MC, Cavalry Club, Piccadilly, W1 - Farm 560 Sportsmen - Captain Gordon Henry Anderson, late of His Majesty's 18th Hussars, and now on the Reserve of Officers for the same distinguished regiment, son of Colonel Anderson, of the 19th Prince of Wales' Own Yorkshire Regiment, was born in June 1881, and on completing his studies at Blundell's, joined Paget's Horse, and at the age of 18 was experiencing active service in South Africa. All his life Captain Anderson has been devoted to sports that try the endurance, and hunting, football, boxing and shooting, to which he has always been particularly attached, kept him in such perfect condition that the long trying South African campaign was less to him than to many less practised in strenuous sport or athletic pursuits. That Captain Anderson possessed the qualities that make the real soldier must have been apparent to those in authority, for he was quickly noted for a commission in the regular cavalry, and for some 10 or 11 years, served in the distinguished light cavalry regiment previously mentioned, retiring in June 1912, and being then placed on the Reserve of Officers of his regiment. Capt. Anderson's proficiency in boxing may be gathered from the fact of his having twice got into the final for the Army Light Weight Championships. He has hunted with the York and Ainsty and the Kildare, and generally participated in the point-to-point races, gymkhanas and all the mounted sports that are maintained as a tradition in our smartest cavalry corps. As a big game hunter, Capt. Anderson has had some exciting experiences, having been once badly mauled by a lioness and only rescued by the intrepid daring of his native bearers. During his period of convalescence Capt. Anderson visited British East Africa, and though unable to do any shooting, thoroughly enjoyed the trip. In 1912 Capt. Anderson visited German East Africa for a 6 months trip, where specimens of practically all the rich game of that region were bagged, including buffalo, kudu, eland and rhino. For the past 12 months Capt. Anderson has hunted elephant in the Belgian Congo, with Mr James Sutherland, entering the Congo by East Africa, Uganda, Lake Albert and Nyassa, returning via the Sudan and along the Nile to Khartoum, securing on this memorable trip over 2 tons of ivory. He has shot big game on 2 trips to Canada, has twice visited Somaliland and Abyssinia, and has soldiered in West Africa. His collection of trophies is rich, interesting and varied and will no doubt yet be considerably increased for the call of the veldt or the jungle, of woods or mountains is irresistible to those who have once experienced its hardships and excitements, but withal indefinable fascination. Capt. Anderson's social club is the Cavalry.
Blundells - Gordon Henry Anderson, 12.10, son of Col. John Anderson, rtd., 19th Regt. And Nora Elizabeth, The Lawn, Stapleford, Taunton, May 1894-Xmas 1899. XV. Major, Queen Mary's Own Hussars; Mentioned in Despatches. Brother of Thos Cunningham Brutton Anderson, Westlake House.
Best - acquainted with Colonel Cody - Buffalo Bill. Took the Duke and Duchess of York on safari with Pat Ayre in 1924
Contact - March 1978 - Article re. "JJ" Hughes - Model T Fords - ….. 'Muguu' Anderson, a hunter/farmer, was another colourful character who painted his T with zebra stripes and called it 'Punda Milia'. This T was fitted with an ingenious four-wheel-drive attachment and thief proof lock. 'Muguu' was always broke and frequently ran his car on kerosene instead of petrol (which was then three times the price) without undue damage. When asked why he had bought a T 'Muguu' replied ….. "I saw several of them chasing one pedestrian the other day, and decided that I was  …. Wrong end of the sport!"     'Muguu' never a conventionalist, farmed ostriches while their feathers found good sales. Howver this particular venture came to a 'feathery end' when a pride of lions broke into his barbed-wire boma one night and killed most of his birds.