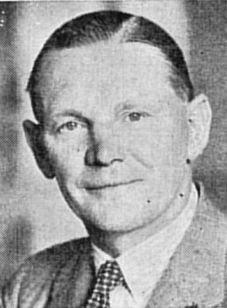 Debretts - appointed Assist. Sec. Takoradi Harbour 1928, Traffic Manager, Gold Coast Railways 1936, Assist. Sup. of the Line, Kenya and Uganda Railways 1938, Gen. Manager of Palestine Railways, and Dir. Gen. of Hejaz Railway 1942, Ports Authority, Palestine 1943, Sup. of the Line, EA Railways and Harbours 1948, Assist. Commr. for Transport, EA High Commn. 1951, acting Commr. 1952, and Gen. Manager EA Railways and Harbours Administration 1953 (also continuing to act as Commr. for Transport); European War 1917-19 in Flanders with London Rifle Brigade (wounded)
East Africa & Rhodesia - 3/1/57 - KBE Rhodesia - East African Commissioner in London since January last, had been general manager of East African Railways and Harbours since 1953. Still at school when war was declared in 1914, he served with the Rifle Brigade in Flanders in 1917. On demobilization he was one of the first special trainees of the Great Western Railway.
He entered the Colonial Service in 1928 as assistant secretary to the Gold Coast Railways, of which he became traffic manager. After 4 years as assistant superintendent of the line of the Kenya and Uganda Railways, he was appointed general manager of the Palestine Railways. In 1948 he returned to East Africa as superintendent of the line. Later he was Assistant Commissioner for Transport and then general manager of EAR&H.