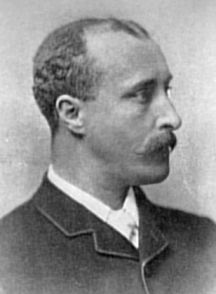 North - Signing treaties in EA for British Govt. May 1888; With H.M. Stanley's Emin Pasha relief expedition 1887-89; arr. Zanzibar from Europe 16/3/1892 to join IBEA Co. at Mombasa; on operation Teita Dist May 1892; Supt. of Kikuyu District Oct. 1892; d. 26/12/1892, Kikuyu, dysentery
Kiewiet - Fort Smith - The Company selected R.H. Nelson, one of Stanley's companions on the Emin Pasha expedition, as the new Superintendent for the Kikuyu district. The choice was unfortunate. Nelson had been trained in the school that did not hesitate to use force; on his way up to Kikuyu he taught the Teita "a lesson" and upon arrival at his post he continued his tactics, which only made the situation more difficult for his mild successor, Mr Purkiss. By the time Portal arrived in January 1893 the station was "practically in a state of siege;" "By refusing to pay for things" Portal concluded, "by raiding, looting, swashbuckling, and shooting natives, the Company have turned the whole country against the white man."
Nicholls - 'a fine fellow', formerly of Methuen's Horse and one of Henry M. Stanley's companions on his Emin Pasha expedition.
Ainsworth - On completing the fort, Capt. Smith proceeded directly west to Lake Victoria and Mr Purkiss, who had been his assistant, was left temporarily in charge pending the arrival of Capt. Nelson (late of the Emin Pasha Relief Expedition) who had been appointed Superintendent of the Kikuyu District. On Nelson's arrival Purkiss proceeded to Uganda and arrived in due course at the Kake, where, however, he went down with fever and was sent back to Kikuyu. By the time he reached Fort Smith he was much better and he was just in time to take over the station on the death of Captain Nelson.
Watt - 1895 - 'In the garden of the fort, some months before, was laid to rest a gallant officer of the EA Company, Captain Nelson, who had accompanied H.M. Stanley in his quest of Emin Pasha.'
IBEA Co. - Nominal List of British Born Subjects resident in IBEA Territories outside the Sultan's Domain, 30 April 1891 - George Nelson, Commander Dagoretti Station
Uganda Journal - Vol 23, p.173 - George Wilson and Dagoretti Fort by H.B. Thomas -  ….The decision to re-establish a station in Kikuyu must have been taken within a few weeks of Smith's [A.F. Eric] return to Mombasa. He and W.J. Purkiss, a Company's assistant, were back in Kikuyu before the end of 1891 building a strong stockade, Fort Smith, on the site, not of abandoned Dagoretti, but of Lugard's first camp among Kikuyu villages and cultivation. ……. [more trouble with Kikuyu] ….. At the end of October ….. Captain R.H. Nelson, a survivor of Stanley's Emin Pasha Relief Expedition, had taken command of the post with Purkiss as second-in-command. ………  Ernest Gedge on his way to Uganda as special correspondent of The Times was here from 17 to 24 December. He found Nelson very ill - "said good-bye to Nelson: he is desperately weak poor fellow. Left what champagne I had with me for his use". But two days later, 26 December, Nelson died, leaving Purkiss once more to take command.
Tucker - had been with Stanley on his great journey through darkest Africa. A more generous-hearted man never lived