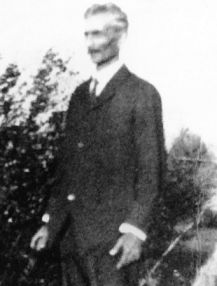 Drumkey 1909 - Directory of Residents - P.N. Zuzarte, Eldama Ravine
Red 22 - P.N. Zuzarte, Londiani Trading Co., Londiani
North - appt. District Clerk, Baringo 5/5/1902; Baringo 1903
Gazette 17/10/1917 - Application for Wine Merchant's and Grocer's Liquor Licence - P.N. Zuzarte, Londiani Trading Coy.
Kenya Past & Present 10 - Interview with Joseph Murumbi - "My father, Peter Zuzarte, was from an old landed Goan family who lived in a place called Giri. In his day well-to-do families could afford to have a priest and a chapel in the house, which my father's family had. In the chapel there were jewels and ornaments worth a great deal of money, and the priest, who studied Latin and Greek, administered the household. My father, however, wanted to go abroad, and when he heard that clerks were being hired for work in East Africa, he applied for a job and was selected to come by Mackinnon Mackenzie, the recruiting agent in Bombay.
From Bombay he travelled to Aden in a P&O boat and by a German boat to Zanzibar. From there he sailed by dhow to Mombasa, arriving in Africa for the first time in 1897. He then walked to Baringo Station which was at the time in Uganda Province. In Baringo he served as a district clerk under Geoffrey Archer, the District Officer, who later on became Governor-General of Sudan.
Q. How long did he work at Baringo?
A. I don't know any dates, but from Baringo he was posted to Naivasha which was also in Uganda Province, on the border, and from there he went to Eldama Ravine.
Q. As a clerk?
A. Initially as a clerk, but then he gave up his job and started his own shop. It was in Eldama Ravine that he met my mother. I don't know the circumstances, and it was there that I was born, in 1911. Later we moved to Londiani where he again set up a shop.
Q. What was your mother's family background?
A. My mother grew up in the Eldama Ravine area. She was the daughter of Murumbi, the Laibon of the Uasin Gishu Maasai.
Land - 1911 - P.N. Zuzarte - Buildings, 5000 sq.ft. (Plot No. 20) - Londiani - 13/5/10 - Leasehold for 99 years from 1/7/10 - Registered 4/9/11
EAHB 1906 - P.N. Zuzarte - District Clerk, Baringo
EAHB 1904 - P.N. Zuzarte - Clerk, Baringo