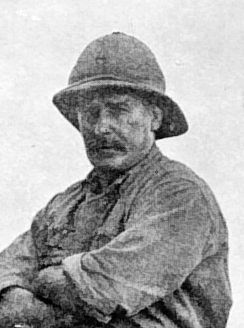 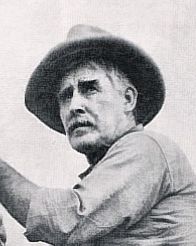 Death Date: 20.4.1922 Mombasa, from wounds inflicted by a lioness when saving the life of one of his native gun bearers

First Date: After SA War with his wife and family (Hut - 1894 Boundary Commn)

Geneanet - George Henry Outram (1866-1922) was a very colourful character. He played Rugby Union and Australian Rules Football, representing both New South Wales and Victoria. He went to the gold fields and found gold. When he went back home, he left his wife. With his wife, Ellen Julia McKenna, he had at least 5 children.
George moved to Kenya in Africa and lived with Edith Radcliffe, née Hanlon, and had at least 3 more children
Habari 26 - 'He followed the building trade and was a keen sailor (small craft). Played rugby for the Randwick Club in Sydney and went into business following success in the Western Australian goldfields. He settled in Sydney and after the break up of his marriage in 1899 went to SA where he served in the Boer War
Meikle - 23rd Sept. 1912 - Duirs rode ahead to call on Dr. Lamb and inquire after Mr Outram who had been badly mauled by a lion and at one time was hardly expected to recover.
Clark - '... one of the men who, unknown to me, happened to be hunting the big herd [elephant] from the other side at the same time I was in their midst, was a professional hunter named Outram. I met him the next day, while he and two Russian noblemen he was guiding were trying to find an elephant bull they had shot, and at that time he told how a wounded bull had tossed him. He and a companion had shot an elephant and the beast had fallen, when Outram approached, thinking the animal dead. But it suddenly lurched to its feet, seized Outram with its trunk and tossed him. Luckily no bones were broken when he fell, and though the elephant followed at once, Outram scurried away while the elephant stopped to trample the pith helmet that the hunter had lost. Now, in thick bush, Outram got right behind the animal and did his utmost to maintain that position while the animal turned this way and that in an effort to catch him. Finally the shaken hunter could keep up the uneven contest no longer and jumped aside into the bushes, when, fortunately, his companion was able to fire the bullet that brought the enraged animal down.
Stoneham - Mau - An interesting story told by George Outram, a noted white hunter of the early days. He was killed by a lion at Maktau 30 years ago. Outram was an Australian, of an habitual directness of thought and a downright manner which greatly impressed natives. He was not accustomed to consider the legality of his actions, but was guided by a rough sense of justice in his dealings with the indigenous tribes. He found a headman very ill in Tanganyika. He was bewitched. Outram went to see the witch doctor, knocked him down and laid into him with the kiboko he carried slung from his wrist. The mganga roared for mercy and took off the spell. The headman recovered!
Land Grant 1905? - G.H. Outram - Agricultural, 640 acres - Mkuyu - Mar 5 - Freehold - Homestead
Curtis - p. 26 - by Dr. Norman Jewell - '....... Two other big game hunters, Ryan and Outram were also captains in the 25th [Royal Fusiliers]. After the war my next meeting with Outram was when he was fatally mauled by a lion and brought to my hospital in Mombasa. Outram, an Australian, had been taking one of his clients, a young, wealthy Australian, out to get a special antelope and told him not to fire at anything else as it would only frighten the antelope away. The client, however, saw a lion and fired at it. Outram ran towards the sound of the shot and saw the African gun bearer being attacked by the lion and he went to the bearer's aid. The lion turned on Outram and bit him through the knee and into the joint as well as clawing him severely. Outram was taken to the hospital in Mombasa from the Serengeti plains, near Maktau, where the incident had happened but died several days later.'
Into Africa - George Henry Outram was 'an old Australian prospector of wide experience' who had hunted in South Africa and had been a member of the 1894 Anglo-German boundary survey. He was with Bronson in 1907 and with Rainey in 1911. Habari Nicholls - Legion of Frontiersmen in WW1
North - Sanitary Engineer; Land Grant application for Homestead, Kikuyu 5/3/1904; Public Officers Game Licence, Kisumu 8/11/1904; Prospector's Licence, Nairobi Jan-March 1905
EAHB 1907 - Sanitary Inspector - Nairobi Municipality
Barnes - Mombasa Cemetery - George H. Outram, died 20 Apr 1922 age 51, European Hospital, Wounds inflicted by lioness
Chandler - Outram was one of the first to penetrate the Masai Mara. For a time he worked for the Newland and Tarlton safari firm. In 1913 he was on a normal safari near Thika when he was mauled by an angry lion. He kept at it and in 1922, near the Mackinnon Road railway station, was killed by yet another lion that he was trying to remove from his gunbearer.
Old Africa 23/6 - Story of the surveying of Outram's farm and wagon treking to Athi River. - George's Memoir
Gazette - 25/10/1922 - Probate and Administration - George Henry Outram late of Nairobi, who died at Mombasa on 20 April 1922. Applied for by Edith Marie Radcliffe Outram of Nairobi
Red 25 - Nairobi School of Dancing run by 'Edythe Outram'
?Conducted the first Anglo-German Boundary survey in 1903