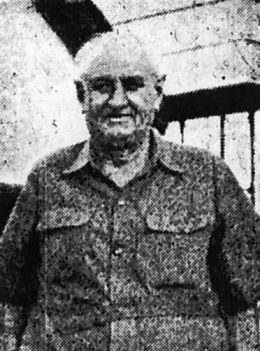 Married: In Naivasha 12.6.1931 Pretoria Mary Shepherd; she was governess to May Roberts' (née Aggett) children

Red 25 has G.C. Aggett, Settler.
Red 31 - G.C. Aggett, Rumuruti.
Hut - 1920 Mutara & Kifuku Est. Rumuruti, Sahiwal/Boran cattle
RS - William Aggett Smith was shot and killed by a German sniper at Longido, in WW1. It was while William Alexander and a party of men, including George Aggett were searching for Willie's grave in the Longido area (several men were shot by this same sniper {rumour has it that the sniper was an Afrikaaner who had fought in the Boer War and had sided with the Germans in GEA} and were all buried in one large grave) that the following incident occurred:- Everyone had settled down for the night sleeping in the open around the camp fire - George Aggett who always slept with his arms above his head and under the pillow was awakened by a foul smell. On opening his eyes he looked straight into those of a lion which was standing over him!! He whipped the pillow from under his head and hit the lion which roared and leapt away. Everyone was awake instantly and, needless to say, no-one slept again that night. The men kept the fire well stoked and the pride of lion kept their distance but did not move off until daylight. This story I have heard from several members of the family.
mini-Sitrep 10 - Aggett has lived in Kenya for 53 years and was one of the first white settlers there. He started farming when he was about 18, on a 5000 acre grant from the British Government. Since 1920 he has been raising hump backed Zebu cattle on his farm in Laikipia, on a plateau below the Aberdare Mountains and Mount Kenya. ......... (much more about Mau Mau)
Article - Kenya Dairy Farmer, Nov. 1961 - story of the building of a creamery - '…..Here another old settler takes up the tale. George Aggett is a big, quiet, powerful man who speaks three tribal languages in addition to Swahili, and has been described as one of the very few men in Kenya who are genuine experts on the Masai. He was a lad in S. Africa early in the century when his uncle visited Narok, and was invited to bring up more settler farmers, with their livestock. He brought, among a score of others, young Aggett's parents, but they were not allowed to farm the land for long. With the treaty, the Narok area became a protected reserve for the Masai, and they agreed to vacate the highlands around Thomson's Falls, and the land at Laikipia, where eventually George Aggett laid claim to his exchanged farm. ….'
Red 22 - G. Aggett, Rumuruti AND G.C. Aggett, Naivasha
Red Book 1912 - G.C. Aggett - Naivasha
Gazette - 12/11/1919 - Register of Voters - Rift Valley Area - G.C. Aggett - Farmer - Naivasha and Marjorie Aggett - Married - Naivasha
Red Book 1919 - G C Aggett - Settler, Naivasha
Gazette - 24/1/1933 - Brand registered in quarter ending 31/12/1933 - Pretoria May Aggett, Mutara Farm, PO Rumuruti, 1A
Gazette - 5/8/1925 - Voters Register - Kenya Province - George Chick Aggett, Settler PO Suguroi Laikipia
Gazette 20 Aug 1971 probate