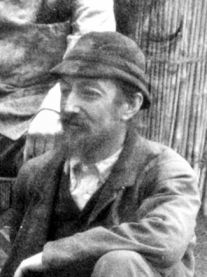 Profession: Missionary and was secretary of the CMS at Mengo, Uganda for some years. First Archdeacon of Uganda in 1893. At Mengo in Aut. 1895. Went down with blackwater fever in 1900 and was invalided home in June.

Purvis - Mwanga - missionaries were made prisoner, thrown into a small thatched hut, left without other food than the few bananas given them by kindly passers by, and finally taken down to the lake and sent adrift in native canoes, after Walker had been stripped of his clothing. ...
Tucker - Budu - the war of 1892 had brought to an end an occupation which had only lasted a few months. Walker and Baskerville were barely able to escape with their lives when the French party rushed in. For 6 years the French Priests were left in practically undisturbed possession of the province.
EAHB 1905 - shown as Secretary of the CMS Mission at Mengo
The African Standard - 26-2-1903 - Invited to the wedding of H.R. Phelips & Miss Jacquette Edith Lambe in Mombasa North - aged 30 dep for EA 5/8/1887; Mengo Dec 1890; Buddu 24/2/1892; dep. Uganda after 5 years 13/6/1892; Ordained Archdeacon, Aug 1893 Zanzibar; dep. Saadani to return to Uganda after leave 19/9/1893, arr. Mengo 18/12/1893; home leave 1900; 'A harmless, well-intentioned, rather eccentric gentleman' (Sir James Hayes-Sadler, FO 2)
Drumkey 1909 - CMS Uganda - Mengo - The Ven. Archdeacon R.H. Walker, MA, Secretary
Uganda Journal - Vol. 2 No. 2 - Further Memories of Uganda by Sir Albert Cook - Archdeacon Walker, the hero of many an epic adventure, who arrived in Uganda in April 1888 to be welcomed by the Kabaka Mwanga, then in the zenith of his persecuting policy, only to be thrust forth in October 1888, with barely the clothes he stood in. As he only retired in 1912 many readers will remember him. Four miles west of the township of Kampala, at Natete, opposite the present Church, is a large mound covering the foundations of the double-storied brick house in which Walker and the Rev. Cyril Gordon lived. A rising by the Mohammedan Arabs, in whose hands the new Kabaka Kiwewa was a mere puppet, was directed against the missionaries, both Protestant and Roman Catholic. They destroyed the house, plundered the contents, and all but killed the missionaries, Walker wrote "The Katikiro filled my white iron box with the things he liked best, and made bundles of other things. Other Chiefs did the same. All this time we heard the rabble thundering at the doors downstairs. The whole place was gutted. The doors were smashed and some torn off their hinges, and the whole place stripped of everything. I remained upstairs and watched the most painful sight; boxes af jam and butter thrown to the crowds in the garden; men climbing in at the windows, tearing down any bit of calico they could find, emptying the contents of the medicine bottles on the floor, tearing the backs off all the books; smashing up anything they could not use."
The next day the whole party including some 20 natives from the French Mission were taken down to Munyonyo and thrust on board the CMS boat, the 'Eleanor', where they were robbed once more of some of the few things remaining to them. Mr Walker having even to part with his coat and trousers. They landed on the little island at the mouth of Murchison Bay where a terrible misfortune happened. They had only gone a short way when a hippopotamus charged the boat and stove it in. They were all precipitated into the water, and 5 of the natives drowned. The French Bishop, Mgr. Livinhac, showed his evangelistic zeal by offering to baptize Archdeacon Walker while the boat was sinking! However, they all swam ashore and the boat was eventually recovered and patched up and the party reached the south end of the lake. Archdeacon Walker is still alive and well and lives in Wimbledon. What a book he could write if only he would!
CMS 1887 - Age 30, Of Bradwell Rectory, Suffolk. Dedham Sch. St. John's College Cambridge, BA (3rd Cl. Theolog. Tripos) 1879; MA 1882. 1880 Deacon; 1881 Priest by Bishop of London. 1880-87 Curate of All Souls, Langham Place. 1887, April 19, accepted by CMS. 1887, Aug 5, to E. Eq. Africa Mission; 1887-88 Natete; 1888-89 Uganda; 1889-90, Nasa; 1890-91, Mengo; 1891-92, Budu; 1892, June 17 to England. 1893, July 5, to Zanzibar. 1892, Appointed Archdeacon of Uganda by Bishop Tucker. 1891, June 2, and 1894, Apr. 25, Sec. of the Mission.