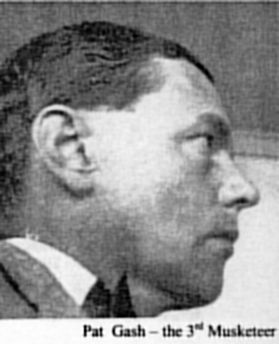 Wolseley-Lewis - 1930s Kiambu - Pat Gash was a particular friend of mine and lived just down the road on one of his father's farms. There were more unattached girls here, than out in the wilds and Pat and I hunted together. In fact we did burn the candle at both ends rather too much………. Pat Gash had a married brother and a sister, all on land his father had bought very early on.
Gazette 3 Feb 1953 deed poll - changed name from Alexis Warren Gash to Alexis Patrick Warren-Gash
Pre-war volunteer to the Kenya Regiment (KR 753).
Rhino Link 15 - Major A.P. Warren-Gash - Pat was born in County Cork in 1911, the youngest son of a Protestant family, who because of the 'troubles' in 1920 moved to Kenya to plant coffee. When war broke out in 1939 he joined the Kenya Regiment and, after commissioning, took part in the final stages of the Abyssinian campaign. Posted to 3/6 KAR Pat joined 11 (EA) Division and took part in the Burma campaign becoming a Company Commander. On VJ Day he was back in Kenya on leave and was selected to command a KAR contingent on the Victory parade in Nairobi getting stuck behind what he described as a smelly tank belching black smoke that could not negotiate the corner at the end of the then Sixth Avenue and Government Road.

On release from the Army Pat returned to coffee farming in Kiambu. After suffering several casualties amongst his labour force at the beginning of the Mau Mau uprising he constructed a stone village with piped water, electricity and a school where he concentrated his labour force with their families effectively turning his farm into a defended position with 'panjis', the sharpened bamboo stakes of the Burma campaign, in defensive ditches around the lines. This was unique and so effective that the GOC General 'Bobby' Erskine, after seeing it for himself commended the idea for general adoption. Pat and his family left Kenya in 1962 and bought a house in Haslemere, but in 1971 he suffered a severe heart attack after which they moved to Spain for a number of years before returning to settle in Worthing, where he died in October 1997.

Jambo 67 reports the death of Alexis Patrick 'Pat' Warren-Gash in 1997, husband of Cynda and a much loved father and grandfather