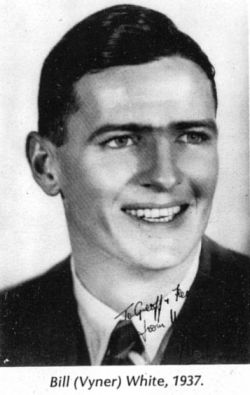 A.G.D. White - Among those who took up gold mining during this period of depression was Bert's {H.A.D. White} second son, Bill, who had joined his father in Kenya and, when Harold visited Australia in 1931, had worked on Ndurumo. Bill found it hard to work with his father and preferred the risks and opportunities of goldmining. He started off on three shillings a day but soon graduated to be a mine captain. He became very experienced and sunk some notable mine shafts. While he was mining he was involved in an explosion which amazingly did not damage him physically. In fact, it dramatically improved his eyesight and thereafter he did not have to use spectacles. ………
Unwilling to work with his father he moved on from Kenya and in the following years had a variety of experiences including working as an editor of a newspaper in Shanghai, getting his pilot's licence in Australia in 1937 and flying for Chiang Kai Shek. When World War 2 was declared he joined the RAAF and was to serve with great distinction as a pilot of Lockheed Hudsons with Number Two Squadron in the RAAF winning a DFC during action against the Japanese in their push into the Netherlands East Indies. His beheading by the Japanese at Ambon in February 1942 was a tragic end to the life of a man who would surely have made an even greater mark.
Gazette 12 Aug 1947 probate
CWGC is on Ambon Memorial