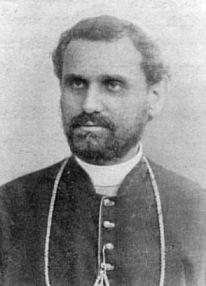 Profession: Bishop. Head of the Holy Ghost Mission at Zanzibar. Established missions with Italian fathers from Consolata Society of Turin, at Kiambu (1902) & Limuru (1903).

Mombasa Mission - Monsignor Allegeyer had been a junior scholastic in Blackrock College, Dublin and later became a member of the Irish Province of the Holy Ghost Fathers. After his apostolic consecration he spent 15 years in Trinidad
Red Book 1912 - E.A. Allgeyer - Nairobi
Playne - Photo - p. 89
Henry J. Koren, Spiritan East African Memorial, 1994: He was sixteen years old when Fr. Ebenrecht took him along to Blackrock in 1874 for his classical studies.  In 1878 we find him in Langonnet and two years later in Chevilly for his senior studies.  Ordained a priest on November 9, 1884, he made his vows at Chevilly on August 23, 1885.

When in the same year he went to Trinidad to teach at St.Mary's College, his voice proved too weak for that task; thus he went to work in the parish in nearby Newton.  In 1890 we find him for a ten months stay on the island of Grenada, where he built St. Andrew's church and its schools before returning to Trinidad.   He acquired an excellent reputation as a pastor. His pastoral experience plus his fluency in both English and German made him a prime candidate to succeed Bp. de Courmont  in 1896, and the Holy See agreed.   He was ordained a bishop at Knechtsteden by Bp. Fischer, later Cardinal Archbishop of Cologne, on April 15, 1897.  The speaker for the festive occasion was Msgr. Simonis, a good friend of the Congregation, who at that time was also a member of the German Reichstag (Parliament).  In gratitude Bp. Allgeyer named two places for them:  Fischerstadt, now Rombo, in Tanganyika, and Simonisdale, now part of Nairobi.

He called the Marianhili Trappists from Natal to open missions in Usambara and highly appreciated their work; he loved the Precious Blood Sisters, the St. Joseph of Cluny Sisters as well as the Sisters of Our Lady of Africa, and had happy relations with all but one missionary institute that came to Kenya.  His cordiality and loyalty in dealing with human beings made it a pleasure to work under him. Moreover, his selection of sites for new missions proved to be excellent, and he was a success in nearly everything he undertook.

When in 1906 the Bagamoyo Vicariate was divided off from the Zanzibar Vicariate, he retained the nine stations established in Kenya as his domain, while the sixteen others went to the new vicariate.   Encouraged by Governor Sir Arthur Hardinge, he founded six more missions in his vicariate.   In 1914, when he went on leave to Europe, the outbreak of World War One prevented him from returning to his vicariate.  He resigned therefore and was succeeded by Bp. John Neville.

In 1919, when peace had come again, priests were badly needed in the Bagamoyo vicariate.  He returned to Africa and served as a simple priest in Gare, Rombo and Kibosho. He could celebrate his silver jubilee as a bishop there in 1922 and then retired to the Paris motherhouse of the Congregation.  Later when his infirmities required nursing, he was sent to Chevilly's infirmary.  He died there after a long illness.