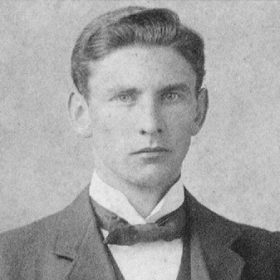 Profession: Administrative officer-in-charge at Luba's in Sept. 1897 - Sudanese Mutiny - made prisoner by the Sudanese and shot by Bilal Effendi

Fitzgerald mentions a Mr Wilson as at Melindi in 1891 - this could have been George Wilson or Norman Wilson or D.J. Wilson
Tucker - buried at Namirembe
North - UP - Appt. 3rd Class Asst. UP 11/7/1896; based at Luba's as temp. Chief Civil Officer, Usoga 1897; d. 18/10/1897, murdered by Sudanese mutineers at Luba's
Ansorge - It was at Luba's, where the Soudanese mutineers made their first stand and where they murdered three Europeans. Poor Major Thruston had lately succeeded to the highest military post, viz. that of Commandant of the Uganda Rifles, a force composed at that time entirely of Soudanese. He spoke Arabic fluently, and, as I thought, knew the Soudanese thoroughly. But his openly expressed affection for them led him to trust these blacks too much. He was in hopes that his mere unarmed presence would restore confidence, whereas the mutineers immediately placed hands on him and on Mr N. Wilson, the civilian in charge of Luba's I can only speak of this from hearsay, as I was stationed at the time in Unyoro. The mutineers had already placed Major Thruston and Mr Wilson in irons, when Mr Scott, in charge of a Government dhow put in at Luba's. If what I heard is true, Mr Scott was warned by his own men not to land, but he either could not understand them or refused to be guided. The moment he landed, he was seized by the mutineers and led to the fort. According to one story, he tore himself free and made a rush for his dhow, but, though a burly and strong man, he was caught, overpowered, and placed in irons; and the villains, it is said, threw him on the ground and inflicted a number of lashes with a hippo-thong. Next day the mutineers made their unsuccessful assault on the small party of Europeans stationed on the adjoining hill. Exasperated by their defeat and in revenge, they, on returning to the fort, murdered the three unfortunate captive Europeans in cold blood. According to some, ghastly suffering was inflicted; according to others, Bilal Effendi, the ringleader, murdered all three by blowing out their brains.
Uganda Journal - Vol 22 - The Mutiny Memorial at Bukaleba by H.B. Thomas - on the south side of the memorial - In Memory of Norman Alexander Wilson of Castle Park, Huntly, Scotland who lost his life here at the age of 25 when in charge of this province during the Soudanese rebellion. He was treacherously made prisoner and was shot by Bilal Effendi on the 19th October 1897. Also to the Memory of William Neil Scott Engineer of Campbeltown, N.B. Aetat 35, murdered at the same time and place
Uganda Journal - Vol 20 (1956), 210 - The Wilsons of early Uganda by H.B. Thomas - N.A. Wilson of Castle Park, Huntly, Scotland was a young administrative  officer who reached Uganda early in 1897. When, in September 1897, the Sudanese mutiny broke out he was in civil charge of Busoga District, being stationed at Luba's Fort. Here he was joined by Major A.B. Thruston, Commanding Uganda Rifles; and here he, Thruston and W.N. Scott, the engineer of the steam-launch were murdered by the mutineers on 19 October 1897. He was 25 years of age at the time of his death. A cairn with a tablet to his memory (and of his fellow victims) has been erected close to the site of Luba's Fort, near Bukaleba, Busoga.
Barnes - St Paul's Namirembe Cemetery - Norman A Wilson, 1872 Castle Park Huntly, murdered at Luba's by the Soudanese mutineers 19 Oct 1897 and whose body rests here.
Tucker - butchered by the mutineers on Oct. 18th