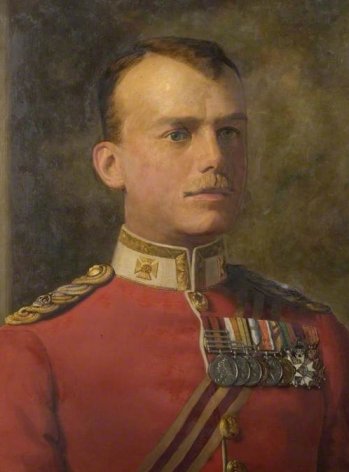 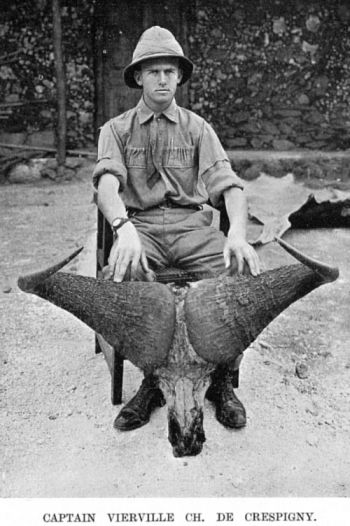 Death Date: 17 July 1927 Singida, Tanganyika, having been badly mauled by a leopard

Profession: Aide-de-Camp to HM Commissioner, EAP. In East Africa at the same time as his father Sir Claude

Drumkey - Apr. 17 1908 - Lieut. C.V.C. de Crespigny was tried and acquitted of the charge of causing the death of his native servant by a rash and negligent act.
Drumkey 1909 - 3rd KAR, Nairobi
Gazette 1/10/1906 - Lt. C.V.C. de Crespigny appointed to act as an Asst. Collector for the Nandi district of the Province of Kisumu
EAHB 1905 - Lieut. Paget's Horse, Jan 1900; 21st Lancers, Oct. 1900; Wiltshire Regt. Feb 1901; Aide-de-Camp to H.M. Commissioner, EAP, July 1904; Queen's South Africa Medal (4 clasps); King's South Africa Medal (2 clasps)
Drumkey 1909 - Subaltern, 3rd K.A. Rifles; Lieut. Wiltshire Regt.; S.A. Queen's Medal with 4 clasps and King's Medal with 2 clasps
Nicholls - When young Claude de Crespigny was on safari he chased with a hog spear an African who had brought him a warm rather than a cold beer and accidentally killed him. At his trial, to the cheers of the court, the white jury acquitted him of culpable neglect in using weapons, saying that they knew their duty to a white man.
Burke - Game Ranger, Tanganyika Territory; sometime Capt Wilts Regt, ADC to Commr E African Protectorate 1904-05, served in S African War 1900-02, with Nandi Punitive Expdn 1905-06 and in WW1 1914-18 (wounded, despatches) served with RIC during Irish Rebellion 1921 and Ulster Special Constabulary 1922, had French Croix de Guerre, Order of the Crown of Belgium, and was Chevalier du Merite Agricole
Sportsmen - Captain Claude V. Champion de Crespigny - A son of that distinguished sportsman, Sir Claude Champion de Crespigny, who enjoys the reputation of being the most versatile sportsman of the present day and whose many experiences of soldiering, racing, pig-sticking and ballooning are admirably told in his reminiscences entitled "Forty Years of a Sportsman's Life", Capt. Claude Vierville Champion de Crespigny was born on January 25th 1882, and educated at Westgate-on-Sea. When less than 18 years of age, he volunteered for active service in South Africa, and went out from Colchester in Paget's Horse under the command of Colonel Paget. Capt. Champion de Crespigny took part in the operations in Natal, including the three days' action of Laing's Nek, and later saw further service in the Transvaal, east of Pretoria, and was present at the action at Belfast; he continued to serve in various parts of the country until the conclusion of the war, and received the Queen's medal with four, and the King's medal with two, clasps. In 1905 he was appointed ADC to Sir Donald Stewart and proceeded to East Africa, and in that and the following year he served with the Nandi Field Force, and received the medal and clasp. From boyhood, Capt. Champion de Crespigny has been encouraged in every kind of sport and hunting and shooting have been followed with the keenest of inherited taste. During his two years in East Africa the opportunities of big game shooting were eagerly seized and many fine specimens of almost every variety of game were secured.
Rhino Link 17 - diary of S.S. Butler - mention of wart hog hunting on the Athi Plains and de Crespigny following the wart hog down its hole until only his legs were showing! Into Africa - Richard Meinertzhagen, for example, went out on the Athi plains with a man named De Crispigny [sic] to try some pig-sticking a la Indian lancer, but the pigs were warthogs and the lances were poles with bayonets lashed on, and the landscape was littered with animal holes. Worse yet, De Crispigny spotted a lion and took out after it, upon which his horse decided to go home and De Crispigny fell off. Undaunted, he shot the lion at close range with a pistol.
1909 Hull Daily Mail, 13 Oct.: CAPTAIN RESENTS A DOG-BEATING,Captain Claude Vierville Champion de Crespigny was summoned at Witham (Essex) on Tuesday, for assaulting Ernest Sorrell, a butcher, of Hatfield Peverel, on September 26th. Complainant stated that he was driving in a trap with a friend past the entrance gates to Champion Lodge, when the defendant accused him of having with a whip struck his dog, which was playing in the road. Sorrell denied that he had touched the dog, but Captain Champion de Crespigny took hold of his coat and pulled him out of the trap. While he was on the ground the captain struck him three times, and blackened his eye. For the defence, Captain Champion de Crespigny said his dog was slashed by the driver of the trap, and he considered he had a right to hit the man. Defendant's mother and a sister gave evidence that there was provocation through the defendant's dog being hit with a whip. Captain Champion de Crespigny pleaded guilty to the assault, and was fined £2 and £2 14s costs.
There is a good biog. in Wikitree https://www.wikitree.com/wiki/Champion_de_Crespigny-57 and also in https://anneyoungau.wordpress.com/2022/05/21/vierville-de-crespigny-1882-1927/