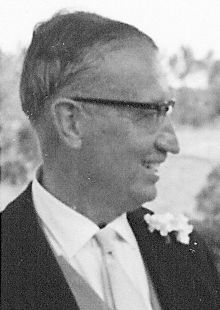 Rosemarie Armstrong - Lengthy obituary from 'The Australian' on file - "…….. By 1926, his family lacked the means to send him to University and he joined the Permanent Trustee Company in Sydney. Ambitious, however, to farm his own land, he took unpaid leave in 1927 and worked his passage to South Africa in charge of 86 merino stud rams. Having delivered these, he went north to join his father, who had settled in Kenya after the war and was engaged in farming pursuits in the highlands around Gil Gil and Ol Kalou.
His nephew Geoffrey describes the next stage of Harold's life as "a pioneering experience with lengthy periods under canvas. Life was tough and there was little scope for social life (Harold claimed that he did not have his first alcoholic drink until he was 27). The standard meal was pumpkin, potato and steak, with bread and jam for dessert. This was no Out of Africa or White Mischief operation. This was serious farming. He loved it, especially living under canvas, and soon took on his own farm, near his father's.
Drought, bushfire and disease only stiffened his determination to succeed. His brothers joined them at different times - Vymer from 1930 until 1936; Geoffrey with his family for some years from 1946. Bert White remained at his farm until his death in 1952, shortly before the declaration of a state of emergency in Kenya and the arrest of Jomo Kenyatta and other Mau Mau leaders.
A hard man, he was respected for his strength of character and his work as a pioneer farmer. Harold's approach was different. Young at heart, broad in his sympathies, sensitive to the winds of change, he was among the first of the white farmers to reach out to Kenyatta on his release from detention. When Kenya attained independence in 1963, Kenyatta - its first prime minister, later its president - wrote to Harold in appreciation of the "goodwill and co-operation of people like you" and appointed him the first chairman of the Kenya Tea Development Authority. From 1927 until 1964, when European-type mixed farming gave way to African ownership and closer settlement, Harold farmed a 2000 ha property, Lesirko, north of Gil Gil east of Nakuru. Much of it had to be cleared of forest.
By 1934 it employed 450 Africans and carried a timber mill, two dairy farms, wheat, sheep and cattle. He took a chance on pyrethrum, was proved right, and paid off his overdraft on November 25, 1939, the day he married Daphne Parker. Harold's public service was recognised in 1964 by appointment as an Officer of the Order of the British Empire. It noted his long, energetic and selfless service to agriculture through membership of such bodies as the Ol Kalou Production and Management Committee, the Board of Agriculture, The Kenya Farmers' Union and its executive committee, the 1959 McGillivray committee that examined statutory boards and committees, and the Kenya Co-operative Creameries (of which he was vice-chairman), as well as his lengthy directorship of Timsales (by which he gave "sterling service to the saw-milling and forestry industry in Kenya")
Despite occasional visits to Australia, abiding interest in its fortunes and family pressure to return permanently, Kenya remained his home. He and Daphne's children, Rosemarie and Peter, were born and educated there, and not even their eventual departures or Daphne's death in 1994 were enough to remove him from his adopted country. Early on Christmas Day 2001, Harold was attacked by thieves in his home at Tigoni. Typically, he discharged himself from intensive care in Nairobi to return home and host a Christmas lunch party. Typically, too, he bore no malice towards his attackers. He died 19 days later. He is survived by his children, 3 grandchildren, and brother Geoffrey. He is gratefully remembered by a host of Kenyans ……….. "
Rosemarie Armstrong - "He married my mother Daphne Parker on 25th November 1938. Daphne's mother, Alice nee Schmidt, came to Kenya in 1913 and was the housekeeper at the Norfolk Hotel until she married William George Parker. They had a coffee farm at Ruiru.
KFA - Pioneer of pyrethrum growing in the Ol Joro Orok/Thomson's Falls area.
KAD has H. White, Lumbwa
Gazette 6 Dec 1938 Aberdare Voters List