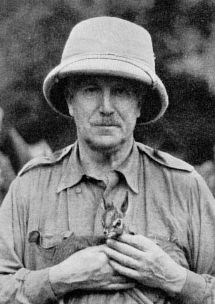 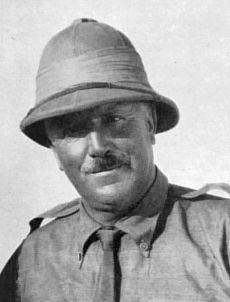 Met by Meinertzhagen in Mombasa - 1915
Nimrod - one of the oldest friends of T. Murray Smith. He had known him since 1899 when he came to Marlborough to give a lecture on bird photography.
Ada - He was a fine athlete, excelling at both swimming and wrestling, and as an amateur boxer he had sparred with Jack Johnson and Tommy Burns. His fame as a wild life photographer had spread around the world. ........... His father died when he was 15 and he started work with a publisher in London as an office boy. He became a bird photographer and a great rock climber. In 1895 he became the world's first free lance photographer of wild life. Came to Africa several times between 1910 and 1914. In 1915 he joined up and was sent with the Royal Fusiliers to GEA.
After his marriage to Ada his health was not all it should have been and his doctor ordered him, much to his disgust, to lead a more sedentary life. .......... He went on lecture tours and gave film shows and in 1928 formed 'Cherry Kearton Films Ltd.' with Cherry and Ada as directors and went again to Africa. ............ In 1938 went on safari in the Rift Valley with a friend, Jack Richardson.
Curtis - p. 26 - Legion of Frontiersmen - by Dr. Norman Jewell - '...... The friendship which I formed with Cherry Kearton in Bura lasted through many years until he died during the second World War.
Chandler - Kearton was an early wildlife photographer who started filming in Kenya in 1909. He helped train Paul Rainey in the filmmaking business, and was a member of the Buffalo Jones expedition. Kearton was often joined in his early film efforts by his brother Charles. ………. [lots more]
Ada - an imposing figure 6' tall and very powerfully built.