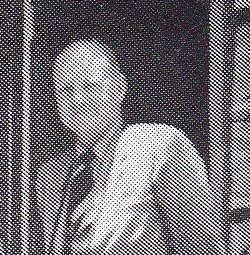 Profession: Medical Officer at Kakamega in 1931. Director of Medical Services in 1953, appointed 1949.

Did not like the fact that tennis was the only game played at Kakamega so started hacking around with a golf club. Founder of golf at Kakamega.
Staff 39 - Medical Officer, Medical Dept., Kenya in 1939, appointed 1928.
Debrett - Dir. of Medical Services, Somaliland Protectorate 1946-49 and Kenya 1949-57; a MLC Kenya 1949-57; 1939-45 War as Col. RAMC (despatches, OBE)
Curtis - p. 71 - 'The Kiambu Hospital' by Dr. Theo Anderson
East Africa & Rhodesia - 21/3/57 - Dr. T. Farnworth Anderson, who has just retired from the Office of Director of Medical Services in Kenya, has been a very devoted servant of that Colony, whose Medical Department he joined early in 1928. A few years later, when he was in charge of the hospital at Kiambu, I spent a most interesting day motoring with him about the countryside, and discovering that he knew intimately many Africans living quite a long way from his hospital. He was on excellent terms with many of the best African farmers - for even in those days there were quite a number whose standards of husbandry were far higher than those of their neighbours - and some of them eagerly discussed their agricultural problems with him. The evidence which I had that day of the exceptional keenness and breadth of interests of a young medical officer convinced me that he would make his mark in his profession and in the Colonial Service, an expectation which he has fuilfilled. When war broke out in 1939 he became MO of the 3rd KAR, and was later on the medical staff at GHQ. After a spell in Somaliland in uniform, he was appointed on his demobilization DMS of that Protectorate, whence he returned to Kenya in the middle of 1949 as Deputy Director, to become Director three months later. He has greatly developed the health centres and the training schemes for Africans, has shown special concern with the medical training of African women, and has done much to raise the status of Africans engaged in the practice of medicine. He must have been pleased when his daughter became a nursing sister at King George VI Hospital, Nairobi, for it was he who planned the building. Dr. and Mrs Anderson, who will spend some months in this country on leave, intend to settle in the Limuru district of Kenya next year.
Carman - General practitioners in Nairobi - G.V.W. Anderson and his assistant T. Farnworth Anderson (no relation).
Carman - served through the Abyssinia campaign and reached the rank of Lieutenant Colonel. In 1943 he was given a military MBE and promoted to full Colonel. When Colonel Gilkes ADMS Somaliland was killed, Farnworth Anderson succeeded him and was first made ADMS and later DMS and he was demobilized in 1946. In 1949 he was made first ADMS and then DMS of Kenya. It was during his tenure of office that Health Centres began to be established in Kenya, though this was only one of the many important improvements which he introduced. ……. Retired in 1956 and was honoured by receiving the CMG.
Dominion - Medical Officer - 1930
Masonic - District Junior Grand Warden - 1968
Gazette 2 Nov 1979 probate