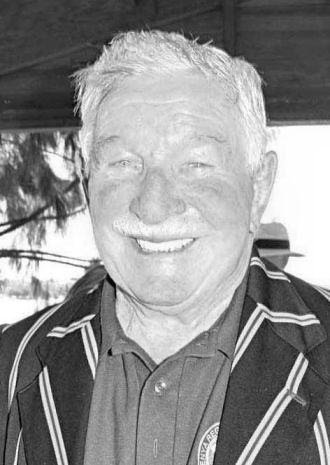 Nee: son of Christopher and Edna O'Toole, twin of Terence

Colonial - Postal Clk. & Telephonist 1944; Postmaster Gr. I 1950; Asst. Contlr. 1953; Senr. Asst. Postal Contlr. 1958; Head Postmaster 1961 Dep. Dir. Posts & Tels 1962-64; retd.; re-apptd 1965; Postal adviser 1965
White Roots - I became friendly with the son of an Eldoret farmer, namely Lesley Mousley. We eventually formed a so-called gang which included Colin O'Shea, the son of T.J. O'Shea the Ford franchise holder at Eldoret and also McDermott O'Toole, a cousin of Colin's.
Rory Michael - KR 1119
Web - "For a man who left the Prince of Wales School back in 1938, Rory Michael O’Toole has far too much hair. It sits thick on his head as it has for well over eight decades and only its grey sheen suggests a senior citizen sitting opposite.  Alert eyes, a raffish moustache and a handshake that grips like superglue belie the man’s 87 years of age. Rory is lean and looks fit, perhaps a legacy of his days of representative rugby though he admits to being just as fond of beer and cigarettes as he was of the game. He’s also got a remarkable memory – not many of us can remember our baptism, but Rory recalls his with clarity because it came much later than usual. “It took place at St Austin’s in Nairobi and I was nearly seven,” he says as he recounts the early years that had his parents, Kit and Edna, regularly on the move between Kenya, Ireland and South Africa. “They never got around to baptising me so when I went to Loreto Convent, the nuns gave me the choice of religion and I’d spend Sundays attending both Catholic and Protestant churches.” Rory opted for Catholic mainly because he knew a cousin who was one and it seemed to make the nuns happy.
Rory was born in Nairobi in 1920 on December 12, a date that would mark Kenya’s independence 43 years later. His twin brother Terence died of diphtheria in Durban in May 1922 and the disease nearly claimed Rory the next month in Mombasa. “I contracted malaria at the same time and as there was no doctor in Mombasa then I had to be nursed back to health,” he says.
Rory lives in Perth, Western Australia with Val, his wife of 62 years, and we’re chatting because of an original Old Cambrian blazer that came into his possession 60 years ago. He wore it when Old Cambrians and veterans of other East African schools gathered beside the Swan River in Perth in March 2007 for a picnic. Rory felt it was time for the old blazer to find a new home and presented it at the picnic to one of the function organisers, Dave McFarnell, who left the Prince of Wales in 1960. Dave was in Nicholson house, named after the school’s first headmaster, while Rory spent his brief time at PoW in Hawke.
If Rory gets around to writing his memoirs as planned, many early chapters will be filled by his school years which saw him educated in Nairobi, East London, Kitale, Eldoret, Nakuru and Dublin. He can thank his mother’s reluctance to settle in Ireland for his return to Kenya where he spent his last school year at the Prince of Wales. He admits it’s a tad ironic that one of the Prince of Wales’ oldest surviving pupils should have one of the briefest connections with the school yet also own a prized relic of its early years. “Of course, I knew a lot of the pupils there because our paths had crossed many times in those days,” says Rory.  “One of my best friends was Koosi Theunissen, a big strapping South African also known as Bulldog, whose parents were wealthy farmers in Uasin Gishu district. “When they died, Bulldog – who was one of the first Old Cambrians and a proud wearer of the striped blazer that they wore – took over the farm. “He married Betty (nee Horley) but unfortunately Bulldog died in his early thirties in 1948,” says Rory. “On his death bed he told Betty that she was to give the blazer to me and that’s how it came into my possession and traveled with me to Australia. “Bulldog was very proud of that blazer ¬– he wore it everywhere – and there can’t be too many of the originals ones still around.”
Rory’s journey through life after school has been as peripatetic as his parents – working or serving in Kenya, Ethiopia, Somalia, Uganda, Tanzania, Ireland, New Zealand and Australia. He eventually retired when he was 80 to take things easier in the new millennium where playing bridge keeps his mind sharp.  Rory was recruited by the Post Office in Nairobi straight after school. He trained as a telegraph operator and his Morse code skills saw him assigned to the Royal Signals Corps in 1940. “Fortunately I survived but it is sobering to note that of my class of 19 who left the Prince of Wales in July 1938, five lost their lives in the war.” Later, he adds, with a mischievous wink: “I’m still serving as I was never officially discharged.”  It was the army that gave Rory a taste for tobacco and alcohol and he admits his years of drinking and smoking would have claimed him too but for a decision 40 years ago to become tee-total. “That was before my youngest daughter Vanessa was born and I realised that if I did not change my ways, I would not see her grow up.”  Rory and Val have three daughters, all living in Australia. They also share a lifetime of memories. Hopefully, his memoirs will tell those tales that space does not permit us to deliver here.