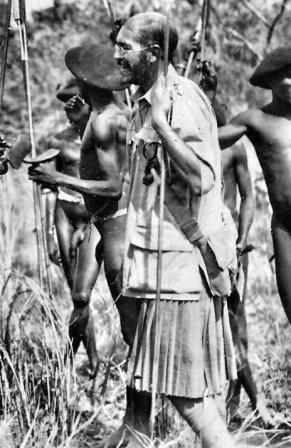 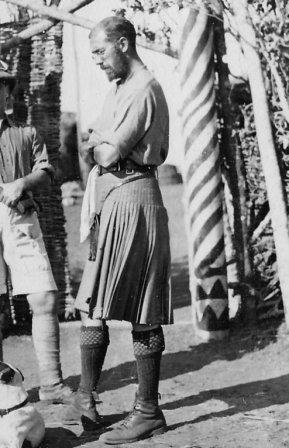 Profession: Administrative officer in Uganda; he became widely known as an anthropologist and spoke more than a dozen African languages. He had a very extensive knowledge of tribal histories and culture and served in EA and Sudan

Last Chance - (1948) - 'One DC whom I knew (he is dead now) became such a passionate admirer of the Masai that he went to live with them: hunted lions with a spear, lost his job in the Colonial Service, and as a result became a distinguished lecturer on anthropology at Cambridge. Many a time he has sat on the floor of my drawing-room in Walton Street, London, declaring it would be murder to force our civilization upon such a fine race of human animals as the Masai. He said this before he left the Colonial Service, said it too frequently and too angrily. R.I.P., Jack Driberg.'
Sportsmen - Mr J.H. Driberg, one of His Majesty's Assistant Commissioners for Uganda, is an old boy of Lancing, where from 1901 to 1907 he was assiduous in the playing fields as he must have been at his studies, for at the latter he obtained an exhibition Scholarship for Hertford College, Oxford. During his 6 years' residence at the famous Sussex college which has turned out so many good sportsmen who later in various parts of the world have maintained its prestige in the Army, Navy or in exploration, travel and big game hunting., Mr Driberg obtained his colours for association football and second eleven cricket and represented the school at Aldershot in the boxing competition, and also for sabres. He was for some time Captain of the school, and for the last years of his residence there president of the Debating Society, and from 1905 to 1907 was editor of the school magazine. During the four years at Hertford College, Mr Driberg played rugby, and was a member of his College XV. In 1908 he won the heavy-weight championship at Oxford, and another favourite pursuit was rifle shooting; indeed Mr Driberg took the deepest interest in everything connected with the rifle corps. That Mr Driberg's love of sports was in no way allowed to interfere with his studies is shown by the fact of his having obtained a second class in Honours Mods. and third in Lit. Hum.; and today, notwithstanding his splendid opportunities for big game hunting, in which he finds the greatest pleasure, Mr Driberg still retains the keenest interest in literature and this, apart from boxing, shooting and other sports, is the chief enjoyment of his hours of leisure.
Web: The death of Mr. Jack Herbert Driberg on February 5 will come as a shock to his many friends and admirers. Born in April 1888, he was educated at Lancing College and Hertford College, Oxford, and in 1912 joined the Uganda Administration, spending nine years in it before he was transferred to the Sudan Political Service, from which he was invalided on pension in 1925. In 1923 he had written his well-known book, “The Lango: A Nilotic Tribe of Uganda”, and thus established his claim as an anthropologist, and, after a training in the London School of Economics, was appointed to a lectureship in the School of Archaeology and Anthropology in Cambridge. He held this post until the outbreak of the War in 1939, when he resigned and volunteered for war-work and was posted to the Near East ; at the time of his death he was concerned with Middle East affairs in the Ministry of Information.
Ray Abrahams He was clearly a remarkable character, who never fitted easily into the moulds that others tried to cast him in, and he was also the kind of person around whom anecdotes and myths, including some of his own production, readily accumulated. As Evans-Pritchard, Southall and John Barnes have all testified, Driberg was almost single-handedly responsible for keeping academic social anthropology, and one might add the place of African research within it, alive in the small Archaeology and Anthropology Department in Cambridge in those otherwise rather barren days of the 1930s. After gaining a little teaching experience in London, the main intellectual centre of the subject in Britain at the time, he was first invited to lecture in Cambridge by Professor Hodson in 1931. He then became a University Lecturer from 1934 to 1942, when he left academic anthropology. He went on to work on Middle Eastern affairs, including war-time military operations, until his death in his late fifties in 1946. He first came to my notice in the 1960s when I began research among the Luo-speaking Labwor people of northern Uganda. By 1934 he was already 46 years old and had enjoyed a colourfully eccentric life as a colonial administrator in Uganda and neighbouring areas of the Sudan until 1926, when he retired partly ‘on medical grounds’. A 1949 history of the Acholi people written in the vernacular by V. Pellegrini, a Verona Father, notes how he was much respected by the local people and was given the nickname Bwana Tong (Sir Spear) because he always carried a spear with him on his walkabohe didn’t bother with the courts but simply dispatched the killer with his own spear. Such at least was his reputation, though I cannot vouch for the accuracy of the latter part of the account. I myself encountered older men who claimed to remember him. One told me that he spoke Luo fluently and was ‘a real man’.
1939 England and Wales Register living in Cambridge as university lecturer - gives birthdate as 2 Apr