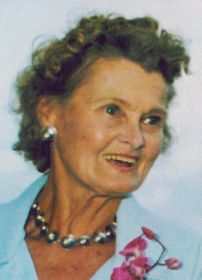 Profession: Of 'Elsa' and 'Born Free' fame. Thrice married she was really never happy with any of her husbands. She left a lasting memorial in her writings and paintings of the Tribes of Kenya and her flower paintings.

Gethin - On the ship going home for leave in 1938 - 'I noticed next to me at the table for four there was a vacant place. The Chief Steward now came up and in a whisper said the woman who had arrived on board just before the ship pulled away from the pier was the Baroness von Klarvell (sic), from Vienna, and she had sent him to ask if I would mind her sitting next to me at table. He thought I might object as she did not know a word of English. I was only too pleased to have this glamorous girl sitting next to me, and when she appeared there was quite a sensation in the dining saloon. The other two at the table were men going to Port Sudan. The Chief Steward now returned with the Baroness, who appeared to be practically naked from the waist up.  She was a light blonde, very pretty, and about 5'7" tall. Dead silence at our table, as the other two did not know German nor did I. The first meal consisted of much bowing and passing the salt, but things improved daily and by the time we got to Port Said, the baroness, Vicky by name, knew quite a lot of English, and when we arrived at Kilindini she knew the language better than I did. She told me her history. It seems her husband was the Fiat representative in Vienna, was an Austrian by birth and they both hated the Hun. When Hitler took over Austria her husband suggested she should make for Kenya, where she had relations farming at Elgon, when he would follow if allowed to do so, but there seemed to be a hitch. She had been to Kenya on a previous visit to her relations and there had met a Swiss who worked in the Coryndon Museum, Nairobi. She proceeded to fall in love with the Swiss and wrote to her husband asking for a divorce, which he agreed to. I doubt if the divorce had gone through when she was on the 'Tanganyika', but on arriving at Kilindini, there was the Swiss, waiting for her and they were married some time later.
Cass - first married to Viktor Von Klarwill she then fell in love with Peter Bally on a ship going to Kenya and returned to Europe to tell Viktor and obtain a divorce. She married Peter Bally in 1938. He called her 'Joy' because she made him so happy. ....... She was also a woman who needed men. In her quest to find love and the perfect match, Joy attached herself to men whose lives and work she admired. ........ by 1939 her liking of the opposite sex had now become apparent to Kenyans. In her thick Austrian accent, she pronounced to anyone who listened: 'Men in Kenya are so sveet, but ze women, zey are cabbages.' ........ during WW2 she was initially interned at Molo but was released at the instigation of the Jex-Blakes and Archie Ritchie. ........ to the NFD to stay with Alys and Gerald Reece ....... there were one or two men in the NFD whom she was determined to have, no matter how great the danger. A few years later, Joy's carnal needs were to become legendary. ........ She fell for George Adamson at a Christmas party at Garissa in 1942, given by Morna and Willie Hale ........... turbulent married life .......... tribal paintings and Elsa followed by other cats ....... troubles with everybody .......... (much more - a slightly fanciful biography)
Gazette 25 Jan 1980 probate