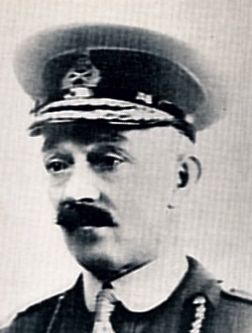 After retirement he became a Director of Messrs S. Jacobs Ltd.
HBEA 1912 - Inspector-General of Police.
Sitrep 6 - Africa General Service Medal 1902-56 - East Africa 1915 - Awarded for an expedition - 1915 - under Lt. Col. W.F.S. Edwards, DSO, against the Turkana. Most of the recipients were members of the Uganda Police, EA Police and 9th Sudanese Infantry.
Police - 1908 - Inspector General of Police in Uganda, was selected by the Colonial Office to be Inspector General  of Police for both EA and Uganda - an entirely new appointment. He arrived at Nairobi, where he established his HQ, on December 1st 1908. He brought with him as his staff officer, Captain P.F. Browne ........... Brig.-Gen. Edwards had made a name for himself when in command of the Uganda Police. He was an indefatigable worker (known as the "Mosquito"), a stickler for efficiency, a stern disciplinarian, and excellent administrator and a sound organizer and no better selection could have been made. He held the appointment of Inspector General from 1908 to 1922, when he retired and became a director of Messrs. S. Jacobs Ltd. ..............…..
He was commissioned as a Captain in the 3rd (Militia) Battalion of the Devonshire Regiment; and, in 1899, seconded for service with the Sierra Leone Frontier Police in West Africa. He took part in the Ashanti Field Force (1900-01), was twice wounded in action, greatly distinguished himself, and was twice mentioned in Despatches. He was awarded the DSO in 1901, and the Ashanti Medal with two clasps. From 1901-06 he served as a Captain with the SA Constabulary, a semi-military mounted force raised by Lieut.-Gen. R.S. (later Lord) Baden-Powell. He received the Queen's SA Medal with 5 clasps. Other members of this force also later served with the BEA Police, including A. Montgomery, W.K. Notley, J.F. Wolseley-Bourne, C.F. Bristow and H.P. Rice. In 1906 the Colonial Office had appointed Capt. Edwards to be Inspector General of Police in Uganda, where he soon established a high reputation for sterling good work. He commanded the Kioga Punitive Force in Uganda (1907). Three years later he was awarded the King's Police Medal. He presented to the Kenya Force the "General Edwards Musketry Cup", which is still competed for annually. ..
Both Edwards and Notley were extremely efficient. They accomplished a great deal in improving the Force. The results could be regarded as monumental. ............. The EA Police Service Battalion held the Kagera River front until the close of Feb. 1916. During this period Lieut.-Col. W.F.S. Edwards was appointed Inspector General of Lines of Communications in EA with the rank of Brig.-General, which he held until Feb 1918. He was mentioned in Despatches and awarded the CMG. ..... In 1922 he retired and the post of Inspector General of EA and Uganda Police was abolished. He died at his home near Exeter just short of his 70th birthday, on June 9th 1941.
Debrett - formerly Capt. 3rd Batn. Devonshire Regt. and now Hon. Brig.-Gen.; employed with Sierra Leone Frontier Police 1899-1901; served in Ashanti 1900, Comdg. Sierra Leone Frontier Police Detachment (despatches, medal with clasp, DSO), with S. African Constabulary 1901-6 (Queen's SA War medal with 5 clasps), in command of Kioga Expeditionary Force 1907, in EA 1914-18, as Inspector-Gen. of Communications, and as Gen. Officer comdg. Eastern Forces, receiving surrender of Gen. Von Lettow Vorbeck and German Forces at Abercorn Nov 1918 (despatches 7 times, CB, CMG, Brevet Major, 2nd Class Russian Order of St. Anne with Swords, 1914-15 Star, CB, 2 medals, Order of Aviz of Portugal); commanded Turkana Expedition 1915 (despatches, medal with clasp, Brevet Lieut.-Col.); appointed Inspector-Gen. of Police and Prisons, Uganda 1906, and of Police of E. Africa and Uganda Protectorate Police Forces 1908 (Police medal); is a FRGS and a FRAI
Uganda Journal - Vol 22, p. 186 - Group photograph of Uganda officials November 1907.
Gazette - 4/11/1914 - Appt. - Railway Protection Troops - To be Commandant - Major W.F.S. Edwards, DSO, Inspector General of Police, BEA and Uganda, vice Captain J.C.H. Grant
Gazette - 11/8/1915 - Appt. - EA Police (Military Service Battalion) - To be Lieutenant-Colonel (Temporary) - Major William Frederick Savery Edwards, DSO
DSO - London Gazette 15/1/1901 - In recognition of services during the recent operations in Ashanti. The Insignia were presented by Colonel C. Ridley. The DSO was awarded for the taking of Kumassi, for commanding the advance forward of the Relief Column. Lieut. Edwards was then seriously wounded. He retired from the Army on 17/7/1901 and joined the Reserve of Officers ………….. {lots more} …. Is an FRGS and FRAI
Red Book 1912 - Police Dept. - Inspector General
London Gazette - 1 May 1917 - Despatch from the Governor of the EA Protectorate bringing to notice the undermentioned names for valuable services during the operations against the Turkana, a tribe resident on the Northern Frontier of the East Africa and Uganda Protectorates, whose open hostility to government since the outbreak of war rendered a punitive expedition necessary.
Kill - Mrs Edwards had a genet cat as a pet.