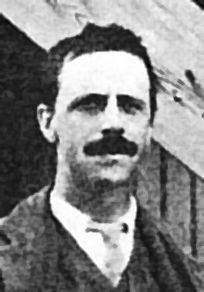 Profession: Established a business in Nairobi which became a leading firm of hardware merchants. Later he branched out into supplying all labour saving devices, domestic, agricultural and industrial.

Kenyatta - Kenyatta for a time worked for a certain Stephen Ellis looking after a store of farming and engineering equipment.
Playne - Group photograph of the Colonists' Association of British East Africa
Playne - Stephen Ellis & Co. - In 1905 Messrs Stephen Ellis & Co. established themselves in Nairobi in these lines. Mr Ellis, who originally came from London, was previously on the West Coast of Africa on the Government Railways, and later managed the hardware department of Messrs. Gailey & Roberts. A good stock of hardware, agricultural implements etc. is always kept by the firm.
Playne - 'The Leader' - founded on the remains of the fallen 'Star', was the project of Mr Thomas Raynes, a prominent citizen of the Nairobi community, who acquired the whole of the essential stock and machinery of the defunct journal. The first intention of that gentleman was to send to England for a capable editor; but at the psychological moment he was informed of the arrival at Mombasa of Mr Alexander Davis, and experienced South African journalist and the editor-in-chief of the 'African Review' of London. A correspondence ensued, resulting in the engagement of Mr Davis as managing editor. Mr Davis brought out the first number of the 'Leader' on May 23, 1908, and the journal instantly enjoyed public favour. The enterprise was formed into a company, under the title of the Caxton Printing and Publishing Company Ltd., with Mr Thomas Raynes as managing director; Messrs Stephen Ellis, Dr. Hannigan, D. Cooper, and H. Howitt, directors; and Mr S.C. Fischat, secretary. Later Mr A. Raynes joined the firm as business manager.
Macmillan - 1930 - Stephen Ellis & Co., Hardware Merchants - the business is one of the oldest of its kind in Nairobi, and was established in 1904 by the gentleman whose name it bears. After his death in 1924 it was continued by his partners, Mr A. Ashworth and Mr J.G. Davidson, the present owners, each of whom is actively engaged in its management.
Drumkey 1909 - Committee Member, The Colonists' Association of BEA
Drumkey 1909 - Iron-Monger - Nairobi
Red 22 - Stephen Ellis & Co., Government Rd., Box 31, Nairobi - Hardware Merchants
Land - 1907 - S. Ellis - Building, 4.651 acres, Parklands, 7-9-04, Registered 10-6-07
Land - 1911 - Stephen Ellis - Buildings, 7500 sq.ft. (Plot No. 19) - Londiani - 18/4/10 - Leasehold for 99 years from 1/7/10 - Registered 12/7/11
Land - 1911 - Stephen Ellis - Buildings, 14340 sq.ft. (Plot No. 16) - Londiani - 26/4/10 - Leasehold for 99 years from 1/7/10 - Registered 12/7/11
Land - 1912 - Stephen Ellis - Agriculture, 640 acres - Lumbwa - 7/4/11 - Occupation Licence for 2 to 99 years from 1/11/11 - Registered 16/2/12
Advertiser - 12/6/1908 - mention of the store of Stephen Ellis broken into by burglars
Gazette - 7/4/15 - Liable for Jury service, Nairobi District - S. Ellis, Merchant
Nairobi Forest Road Cemetery - Stephen Ellis, British, age 63, died 13/9/23
North - Architect & Surveyor
Red Book 1912 - S. Ellis - Nairobi
EAHB 1905 - Messrs. Gailey & Roberts, Nairobi
Gazette - 24/10/1923 - Probate and Administration - Stephen Ellis, late of Nairobi, who died at Nairobi on 13 September 1923. Applied for by Elizabeth Walton Ellis, Joshua Stevenson and Wilfred Arthur Boynton Pailthorpe all of Nairobi